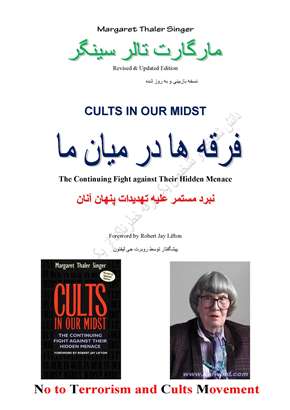 Dear Mr. Sokol Balla‎ and all the dedicated Journalists in VisionPlus TV.

I have seen your latest real story a report on Mek, that I have served more than 30 years as a High Ranking Member and also member of NCRI for 20 years.

Members or rather ex-members like me who have been educated in Europe (in my case UK) were used to educate members that had no idea about international politics and then we were exploited in order to deceive the West about the real nature of Mek.

Mek in the last four decades that has been cut off from Iranian society has learned how to deceive journalists, individuals, and uninformed politicians by staging shows by what looks like very dedicating and enthusiast members such as Mr. ShahriarKiamanesh who was a student in USA and who talked to you just after what seems to look like a warm and long phone call to his child and grandchild!!! A fake show that was very deliberately organized to white wash MEK’s cultic behavior of cutting all members from outside world including meeting their children, parents, brothers and sisters ,…

Last year (2018) was a year of hundreds of reports on Mek, an Iranian exile group that is a darling of ‎Washington neocons which has set up what critics describe as “a state within ‎a state” inside Albania and their Mafia like atrocities against its dissident members as well as ‎against the people of Albania, as described by a Retired Colonel Ylli Zyla, a former Albanian ‎counter-terror and intelligence official that has become an MEK watcher, that not only shocked the ‎Albanians but also caused great embarrassment for the Mek leader Maryam Rajavi and her ‎guardian, “the US embassy” in Tirana. ‎

In a naive reaction, Mek that, with the backing of US Embassy in Albania, was prepared for ‎the worst scenarios preventing any contact from outside world with their fleeing members and their ‎ongoing preparation of a modern prison and internet hacking center, to the extent that “Homologically ‎to Mr. Trump their God Father” could not tolerate any independent, non-staged journalism and reporting even outside their barracks and if it was not Albania and in front of camera, would ‎have killed them branding them “terrorists, terrorists”, and add it to their glorious ‎victories of fighting ‎for democracy, were forced to accept Vision Plus journalists into their barrack!! Why?

Is Vision Plus the only non-terrorist media in the world. if not what has forced them to let terrorists (as they call Journalists or any one seeking the truth about them) into their barracks? have they suddenly changed after years of practising suppression of members and cutting them from outside world? or maybe all the Albanian and international members of media have been lying in the last year about Mek?

Entry of Vision Plus crew into MEK’s barracks is not the first and not the last, since Mek is professional in arranging staged tours for members of media in the last three decades in order to feed them with fabrications repeated by their robotic members in order to pursue their ends using journalists. There has been many journalists that has not let Mek to take their conscience hostage and has not played into their hands and been able to read between the lines to find the truth about Mek. Why Mek has suddenly changed course and retreated to this extent?

Where even Mek’s most zealous supporters (US neocon administration and Saudi Arabia) have officially emphasized that Mek has no base and influence in Iran or Iranian politics.

What is the reality?

To my 30 years of experience helping Mek, the answer lies in the fact that:

After they have been thrown to the dust bin of Iranian history by Iranians due to their terrorism and unification with the Iranian Enemies and Masoud Rajavi’s attrocities against women. They used their financial support of Iraq and Saudis and … expanding their propaganda machine in buying ex-Politicians, journalists, arranging shows by filling them with people from refugee camps… just to stay on the air by being reported by the media. Then they sell that to their members, to deceive new politicians or individuals … to gain more media coverage.

After Mek came to Albania the defected members and their families have disclosed horrific breath taking facts about Mek which was reflected in the Albanian and consequently in the international media which was a big blow to Mek’s and it blow away its Media Cloud existence, down grading them in the political market they present themselves for sale or to be hired.

Therefore Maryam Rajavi’s most basic asset of using media to present a dangerous terrorist organization as a freedom loving democrats was in danger being blown up so it must be mended. That is why Vision Plus finds access to the camp and to stage fully talks to a few handpicked members.

I hope Vision Plus does not play into hands of Mek whereas a violent radicalized extremist discourse present in the territory of many EU Member States; whereas this discourse opposes democracy, the rule of law and human rights, undermines pluralism, promotes violence and intolerance, and is against all EU’s democratic institutions.

In case you were interested in MEK’s real story and a report from inside NTCM would be more that glad to show Mek’s real face, based only on their own published stands and positons published by Mek.

Mr. Davood Baghervand Arshad the highest ranking member who has defected was sentenced to 10 of year of imprisonment just because he wanted to leave MEK after Mek supported September 11 barbaric act.

Chairman of NTCM (No to Terrorism and Cults Movement Europe)

consisting of defected members of MEK