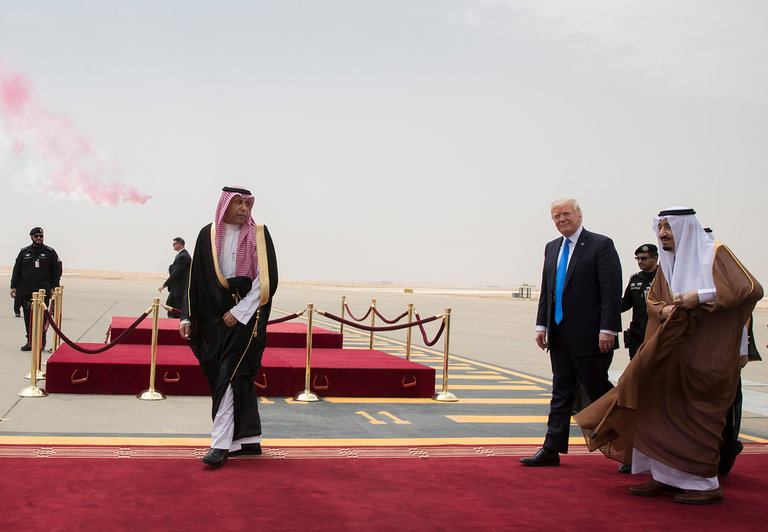 Given President Trump’s appetite for spectacle, Saudi Arabia could not have been a more fitting opening for his first overseas trip. The palaces, the fancy robes of King Salman and his court, the sword dance, even the creepy glowing orb used to inaugurate Saudi Arabia’s new counterterrorism center, seemed just the right props for a former television celebrity. His hosts went out of their way to indulge his weakness for flattery and deal-making. Mr. Trump tried hard to make amends to the Muslim world he had spent many months insulting.

This was necessary and long overdue. Mr. Trump’s indictment of an entire religion had disfigured his campaign and his presidency, undermined America’s long commitment to freedom of religion and gave fresh ammunition to the extremists Mr. Trump cannot defeat without the support of Muslim leaders.

Much of the rest of his message was more problematic.

He said nothing about the need to advance the cause of human rights in Muslim societies that discriminate against women and minorities. He sketched an unsettling path forward in which the United States and the Sunni Muslims would join in common cause against not only the extremists but against Iran, a position that could come back to haunt him.

The man who once complained that “Islam hates us” described it as “one of the world’s great faiths.” He said the fight against terrorism was not a “battle between different faiths,” as some of his advisers had argued, but a struggle “between barbaric criminals who seek to obliterate human life and decent people, all in the name of religion.” He urged Muslim leaders to drive extremists “out of your places of worship,” “out of your communities,” “out of your holy land” and “out of this earth.”

But he provided no guidance as to how the war against extremism could be won, and showed no appreciation for the fact that Wahhabism, the fundamentalist Sunni orthodoxy that gives legitimacy to Saudi Arabia’s royal family, has inspired ISIS and most other regional terrorist groups. Nor did he suggest, as President Barack Obama often did, that Muslim countries are unlikely to wipe out extremism until they reform their economies and political systems so their people have ways to address their grievances, to participate in governing, to obtain an education and jobs.

Mr. Trump chose instead to single out Iran, the leading Shiite-majority state and Saudi Arabia’s main enemy, as a threat because of its support for militias in Lebanon and Yemen and for its backing of President Bashar al-Assad in Syria. Many of Iran’s activities are indeed destabilizing; but Mr. Trump’s friend Vladimir Putin has been no less responsible for keeping Mr. Assad in power.

In some ways Iran is an easy political target. Sunni Arabs feel threatened by Iran and are competing with Iran for regional influence. Israel detests Iran and so do many members of Congress. Yet to see Iran as implacably hostile is much too simple. Even as Mr. Trump reaffirmed America’s partnership with the conservative Saudi royals, Iranians were re-electing a moderate, Hassan Rouhani, as president and reaffirming their interest in engagement with the West.

While Mr. Trump was explicitly not lecturing Sunni Arab leaders on human rights, Secretary of State Rex Tillerson responded to the Iranian election by advising Mr. Rouhani to restore the rights of Iranians to freedom of speech and organization. The Saudi human rights record is no better than Iran’s.

Mr. Trump’s determination to forge an anti-Iran alliance with the Sunni Arab states and isolate Iran could drift into military confrontation. The nuclear agreement negotiated between Iran and the United States could unravel, causing a split with America’s European allies. These are consequences that Mr. Trump, in his enthusiasm for Saudi Arabia, seems to have thought little about.