From brides to battlefield, women taking up new roles with ISIS 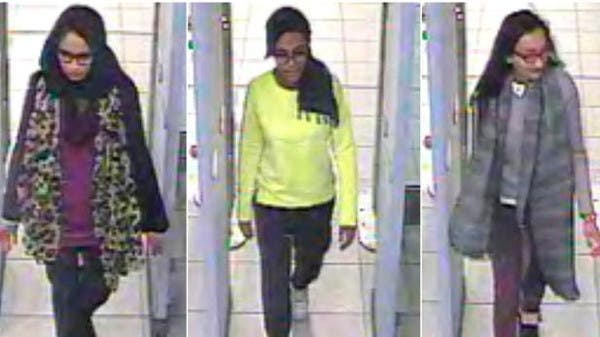 In one of the most high-profile recent cases, three British schoolgirls are thought to have travelled through Turkey to Syria in February to join ISIS. (File photo: Reuters)

Women travelling to join ISIS militants are no longer just seeking to become “jihadi brides” but are taking on new roles, on the frontline in logistics and intelligence and as medics, according to military and expert sources.

Female presence in ISIS’s battles to establish a medieval-style caliphate across the Middle East has been unusual with the radical Sunni Islamists imposing strict restrictions on women’s dress and behavior and deeming their role as domestic.

But as more foreigners, both male and female, go to join or fight ISIS, the traditional role of women is being challenged, with reports of women working at hospitals controlled by ISIS and aiding in logistics.

Colonel Rafat Salim Raykoni, head of a military intelligence unit in the Iraqi Kurdish peshmerga forces battling ISIS militants, said women fighters had emerged around the town of Sinjar, a frontline in the fight in northern Iraq.

“They are not many but they are starting to arrive on the frontline. Here in Sinjar they are very active,” he told the Thomson Reuters Foundation in the peshmerga headquarters in the outskirts of Sinjar city.

Raykoni is not the only one to have spotted the trend with high ranking commanders in different areas of Iraq and Syria reporting ISIS women around the battlefield although so far no female militants have been reported killed.

Pareen Sevgeen, the commander of a Kurdish women militia in Iraq, YJA Star, who is also known by her nom de guerre Beritan, was fighting north of Sinjar earlier this year when her brigade intercepted communications of the jihadis.

“We heard a woman giving order to men. She was saying move there or here, go left or right. She was obviously a commander,” said Beritan while sitting in her compound outside Sinjar dressed in a dark green military uniform.

Women in a new role

YJA Star, which also campaigns for gender equality in the region, was able to re-take the area within hours and they never heard from the woman again despite making inquiries.

“We looked for her because we wanted to know more. We know she is a foreigner by the way she was talking on the radio. Arabic is not her first language. Our sources on the other side told us she is from India.”

The Canadian counterterror research group iBRABO, late last year said they had identified one woman who travelled from Canada to ISIS frontlines, giving away her locations on Twitter as she visited besieged cities in Syria and Iraq.

Tracking her mobile phone’s geo-tagging function on Twitter, the group concluded her movement “reflects a broader trend of women becoming more active in supporting male jihadists, such as intelligence collection, implementation and adherence to Sharia Law, and even reported execution of punishments to women judged to be in transgression of Sharia Law.”

Jayne Huckerby, director of the International Human Rights Clinic at Duke University’s School of Law, North Carolina, was not surprised about women appearing on the frontline as thousands of foreign recruits join the fight.

The London-based International Centre for the Study of Radicalization and Political Violence (ICSR) estimates at least 20,000 foreigners have joined the Syria/Iraq conflict of which about 4,000 are Western citizens. The Institute for Strategic Dialogue estimates about 550 of these are women.

ICSR director Peter Neumann has said about 80 percent of foreign fighters from Western nations are joining ISIS in Syria and Iraq, drawn by its ideological appeal and savvy outreach in foreign languages and over the Internet.

ISIS seized large sections of north and west Iraq and much of eastern Syria last year and the Iraqi government, with its Western and Iranian allies, is now trying to recapture the nearly one-third of Iraq under the jihadists’ control.

So far most attention about the role of women in the conflict has focused on those joining as “jihadi brides.”

In one of the most high-profile recent cases, three British schoolgirls are thought to have travelled through Turkey to Syria in February to join the militant group. Their families and British authorities have made repeated appeals for them to return home.

But four of nine British medical students who were believed to have crossed into Islamic State-held areas this month were also reported to be female with their parents are trying to convince them to come home.

“We are providing consular assistance to families of British nationals who are believed to be missing after travelling to Turkey,” a Foreign Office spokesman said without giving any further details of the students who were studying in Sudan.

The Home Office has said the medics would not automatically face prosecution under anti-terror laws if they returned to Britain as long as they could prove they had not been fighting for ISIS.

Huckerby said the evidence challenged the Western stereotype of women just wanting to be “jihadi brides” and was an important evolution in the group’s view on the women in the caliphate.

“A number of Western women who travelled to (ISIS) have expressed their willingness to fight and to be in combat. They want to become Jihad Jane types,” said Huckerby.

She said this shift was flagged in a recent manifesto by ISIS’s all-female Al-Khansaa Brigade whose mission is to pursue and arrest women who break the group’s strict rules on Islamist morality.

This manifesto, translated by the London-based think-tank the Quilliam Foundation, maintained that women are permitted to abandon their domestic roles for jihad “if the enemy is attacking her country and the men are not enough to protect it and the imams give a fatwa for it.”

There are precedents of women fighting in the Islamic world, said David Romano, a political science professor at Missouri University and expert on women fighters.

He pointed to the Moscow theatre hostage crisis of October 2002 when at least 170 people were killed including 40 male and female attackers claiming allegiance to an Islamist militant separatist movement in Chechnya.

About 140 kms (87 miles) northeast of Sinjar, on the battlefield around Teleskuf, peshmerga general Wahid Koveli, head of a Special Forces First Division, has also heard ISIS female fighters on the radio at least twice.

“Female fighters have started to arrive on the frontline. It might means that (ISIS) are in difficulties and they are starting to use everybody to help them fight,” he said.